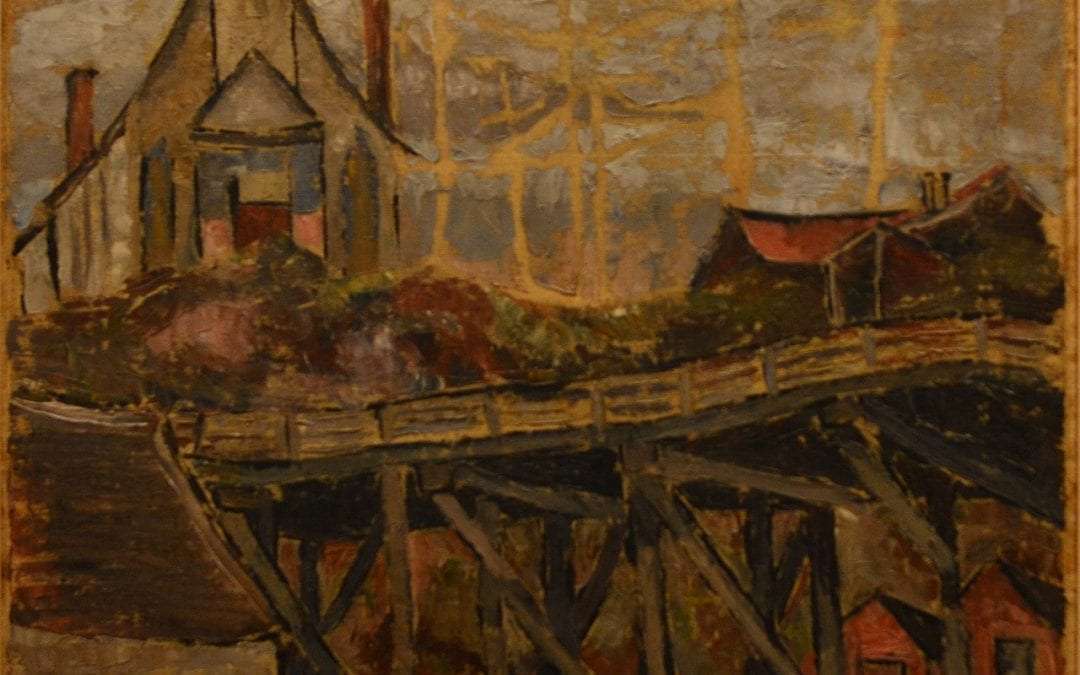 Many of our clients and estate sale customers ask about art from the Northwest School, a distinct movement that began in the 1930s and 40s with artists primarily in the Puget Sound area. Local artists combined traditional Asian and Native American styles with inspiration from modernism and their natural surroundings to develop a unique aesthetic. While Northwest art is now recognized across the country, it is especially beloved in the Seattle area, its original home. The Northwest School is characterized by elements such as earthy tones, symbols of the nature in the Pacific Northwest, spiritual or mystical themes, and the diffuse lighting characteristic of the Skagit Valley area. There is also some influence from surrealism, cubism, and abstract impressionism. Here are some Northwest artists to know and look out for:

The Northwest School’s earliest and most defining participants were four Seattle artists: Guy Anderson, Kenneth Callahan, Morris Graves, and Mark Tobey. Inspired by both their travels and the surrounding environment at home, they combined natural elements of the Puget Sound area with traditional Native American and Asian aesthetics in a new way.

Guy Anderson (1906-1998) is known primarily for his oil painting. Many of his works were inspired by Native American iconography and Greek mythology. He often drew from symbols such as circles, eggs, seeds, spirals, and waves as well as the male nude to convey the tension between the forces of nature and the human condition. Today, you can find Anderson’s art in the Seattle Art Museum, the Metropolitan Museum of Art, and many other museums.

Kenneth Callahan (1905-1986) was a self-taught painter, muralist, and writer who worked as assistant director and curator at the Seattle Art Museum. His earlier paintings were often scenes of laborers and the Northwest landscape in a rough-hewn style with broad brushwork, while his later works were more abstract and metaphysical. You can find Callahan’s works in many private, corporate, and museum collections like the Guggenheim Museum, Corcoran Gallery of Art, and MoMA.

Morris Graves (1910-2001) was one of the earliest Modern artists from the Pacific Northwest to receive international acclaim. His colorful paintings often combined birds, flowers, chalices, and other images to explore themes related to consciousness. Like Callahan, he was a lifelong traveler and influenced by the ideas and iconography of Zen Buddhism. Graves’ work is held in collections such as the Art Institute of Chicago, the National Gallery of Art, the Fine Arts Museums of San Francisco, and many others throughout the country.

Mark Tobey (1890-1976) was widely recognized throughout the United States and Europe for his densely structured compositions, which were inspired by Asian calligraphy methods. His signature style of “white writing” included light-colored calligraphic symbols overlaid on an abstract field. You can find Tobey’s work in the Metropolitan Museum of Art, the Tate Gallery in London, the Phillips Collection in Washington, D.C., and many other collections.

Paul Horiuchi (1906-1999) was known for his unique collage style and layered paintings, which combine traditional Japanese techniques with modern American and European approaches. He studied the traditional sumi-e (ink wash) technique as a child in Japan, then came to the United States as a teenager and worked on the Union Pacific railroad. After moving to Seattle, Horiuchi switched his focus from paintings to collages and developed a style that became extremely popular in the 1950s and 60s. One of his best-known works is the glass mosaic backdrop to the Seattle Center’s Mural Amphitheater, and you can find displays of his art in many collections throughout the country.

Hilda Morris (1911-1991) was a sculptor working mainly in bronze. Born in New York City, she met artists such as Clyfford Still and Guy Anderson after being hired to establish a sculpture program at the Spokane Art Center through the WPA in 1938. After settling in Portland, Morris developed a personal style of calligraphy based on traditional sumi techniques and refined a sculptural style influenced by abstract expressionism. Her major commissions include the Standard Plaza in Portland, the Seattle Opera House, and the Pacific National Building in Tacoma.

James W. Washington Jr. (1908-2000) was an African American painter and sculptor. He began making art as a teenager and studied under Mark Tobey, who encouraged him to incorporate spirituality into his painting. During a trip to Mexico, Washington met muralists Diego Rivera and David Alfaro Siqueiros, encountered soft volcanic stone for the first time, and turned to carving. Many of his works address the topic of racism and include references to Freemasonry and biblical topics.

Helmi Dagmar Juvonen (1903-1985) worked in various media but is best known for her prints, paintings, and drawings. She was inspired by the art and ceremonies of Northwest Native American communities and built rapport with the Lummi, Swinomish, Muckleshoot, Makah, and Yakama tribes. She was also deeply influenced by Mark Tobey, Pablo Picasso, and Scandinavian folk art. In 1959, Juvonen was committed to the Northern State Hospital and legally declared incompetent. However, she continued to create art that her friends exhibited for her. She worked in relative obscurity until the final decade of her life when her work was shown at the Burke Museum in Seattle, the Nordic Heritage Museum in Seattle, the State Capitol Musem in Olympia, and in other museums.

Leo Kenney (1925-2001) was an abstract painter who has been described as a leading figure in the second generation of the Northwest School. A largely self-taught artist, he had his first solo exhibition at just 19 years old and saw one of his paintings purchased by the Seattle Museum of Art at 20. In the 1960s, Kenney developed a more surrealistic and abstract style that often featured circles and geometric figures in bright colors inspired by his experimentation with the psychedelic drug Mescaline. His work has been exhibited at the Seattle Art Museum, the Scott Galleries, the Marison Willard Gallery in New York, and other museums.

Dorris Totten Chase (1923-2008) was a painter, teacher, sculptor, and video artist. Her six-decade career showed extensive experimentation with new mediums and methods, beginning with paintings heavily influenced by the Northwest School. She later integrated sculptures with interactive dancers to create dreamlike videos. You can find Chase’s work installed at Seattle Center and in Kerry Park on Queen Anne Hill, as well as in museums such as the Seattle Art Museum and Smithsonian American Art Museum.

Are You Looking to Appraise Your Northwest Art?

Fruitcocktail Collectables, LLC is an accredited appraisal company based in the SoDo neighborhood of Seattle. As a member of the International Society of Appraisers, we bring a high level of expertise and customer service to ensure your satisfaction with our services. If you live in the Puget Sound region and are interested in an art appraisal, contact us today.